Heynckes searching for solutions without Lewandowski and Muller 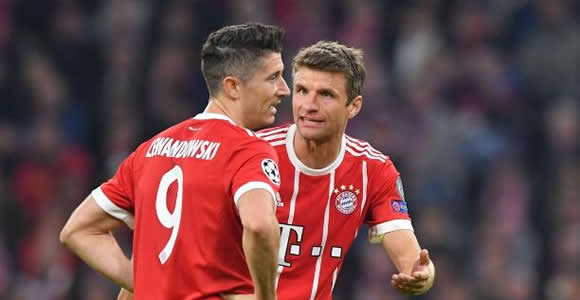 Jupp Heynckes has pledged to "find a solution" in Bayern Munich`s attack after the Bundesliga champions travelled to face Celtic in Champions League Group B without Robert Lewandowski and Thomas Muller.

Muller was already ruled out due to a thigh problem and leading marksman Lewandowski — who has 14 goals in 16 games across all competitions this season — was replaced at half-time after scoring in Saturday`s 2-0 Bundesliga win over RB Leipzig due to a similar complaint.

Bayern will qualify for the last 16 if they win in Glasgow and group leaders Paris Saint-Germain avoid defeat at home to Anderlecht as expected, but veteran head coach Heynckes conceded he has a selection headache to cure.

"Obviously the injuries are unexpected," he told a pre-match news conference.

"However, I will find a solution. It is possible that I could play a 4-4-2 formation, with [Arjen] Robben and [Kingsley] Coman up front, or with these players on the wings and a false number nine. But I will make that decision on Tuesday.

"All big teams face these difficulties, but we always find solutions and that`s what we will do.
"My concern is to protect my players. Lewandowski is not 100 per cent fit, so it wouldn`t make sense to play him."

Bayern have won four and drawn one — winning on penalties against Leipzig in the DFB-Pokal on that occasion — since Heynckes returned to the Allianz Arena to replace Carlo Ancelotti.

A chastening 3-0 defeat at PSG brought an abrupt end to the Italian`s reign and, although he is wary of a hostile atmosphere at Celtic Park, Bayern defender Joshua Kimmich already has one eye on revenge when the Ligue 1 leaders travel to Bavaria at the start of December.

"I am really looking forward to the fantastic atmosphere here. Of course, it can put pressure on you," said the Germany international.

"Hopefully, it will be good but not too good as that it will mean Celtic are winning. We want to win this game also.

"We think we can beat Paris at home, so we can`t make any mistakes. We have players out injured, but our aim is to win no matter what."