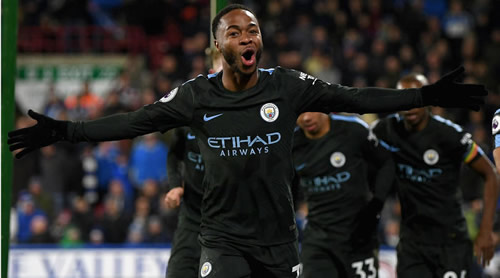 Pep Guardiola took a swipe at Arsene Wenger after Raheem Sterling won a penalty and scored the winner for Manchester City in their 2-1 victory at Huddersfield Town.

Premier League leaders City went behind to Nicolas Otamendi`s own goal on the stroke of half-time, only for Sergio Aguero to equalise from the spot early in the second period after Sterling went down under a challenge from Scott Malone.

The England winger bundled home late on to wrap up the points - securing a record-breaking 11th successive away victory in the process.

Sterling won City a spot-kick in their victory over Arsenal earlier this month, which resulted in Wenger claiming the 22-year-old "dives well", but Guardiola dismissed suggestions the former Liverpool man had exaggerated the contact on either occasion.

"Two clear penalties. Maybe Arsene will say that is [a] penalty," said Guardiola. "I think the penalty is more than clear.

"He can still improve but he`s made a big step. He`s winning games. Now he`s a winning player.

"But not just in terms of goals, now he`s strong, keeps the ball... before he used to lose a lot of balls. He`s 22 years old and still he can improve a lot.

City were far from at their best, but Guardiola was delighted with his side`s gritty display as they claimed their 12th win from 13 league matches.

"The Premier League is so tough, now winter has come, we knew they were so aggressive, so strong, but we are so happy for the way we won," Guardiola told BBC Sport.

"It was a brilliant move to win the penalty. It is impossible to win every game easily, this league is so tough. The guys competed amazingly, which is why we won."