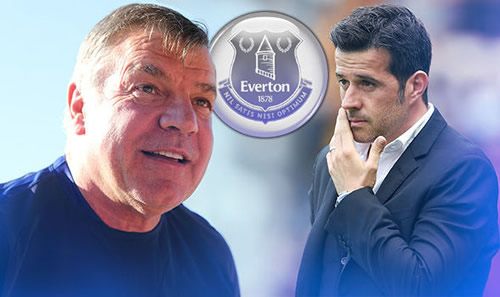 Allardyce, 63, will bring in former Leicester manager Craig Shakespeare as his chief coach as he attempts to reverse Everton`s alarming slide - described shambolic by their former striker Gary Lineker - towards the foot of the Premier League.

One set of talks with Allardyce floundered this month because Everton power broker Farhad Moshiri only wanted to offer him a short-term deal.

Everton instead pursued their No1 choice, Silva. But when it became clear Watford would not part with the highly rated Portuguese coach - dubbed the "new Mourinho" when he performed so well in almost keeping Hull in the top flight last season - Everton were forced to act.

Talks were on-going last night, with Allardyce understood to be looking for a three-year commitment.

Everton, however, were still trying to convince him to take a shorter option, although one with big incentives for keeping the club in the Premier League. A compromise deal of two years, with a large bonus for survival, was one option being discussed.

That would enable the Toffees to chase Silva, or any other big-name boss, this summer while offering Allardyce hefty financial compensation should he succeed in keeping them up.

Survival has looked an increasingly tall order since the departure of Ronald Koeman last month and the disastrous caretaker spell of David Unsworth.

A 3-2 win - coincidentally against Silva`s Watford at the start of the month - is Everton`s only victory in their last dozen league and cup games.

Last Thursday the Toffees, who were expected to make an assault on the top four this season, slumped to a new low in a 5-1 home defeat by Atalanta in the Europa League, followed by Sunday`s 4-1 hammering at Southampton.

A return to management for Allardyce would mark a dramatic u-turn after he walked out on Crystal Palace six months ago claiming he had retired.

Palace owner Steve Parish let him out of his contract on the understanding he was quitting the management game and Everton will owe his former club compensation - understood to be around £2million.

Allardyce was in Abu Dhabi over the weekend watching the Grand Prix, but is understood to be poised to step in after tomorrow`s (WED) home game with West Ham.

Everton`s director of football Steve Walsh, under pressure after a poor summer in the transfer market, is understood to be firmly behind Allardyce.

And given Allardyce`s proud Premier League record of never having been relegated with Bolton, Newcastle, Blackburn, West Ham, Sunderland and Palace, Moshiri has now come around to that line of thinking.

Whatever they decide, Everton need to act quickly. Indeed, Lineker believes his old club can ill afford to delay over the appointment of a new manager as he traces the current malaise right-back to the summer and the reaction to the sale of Romelu Lukaku.

"They are in a bit of a mess at the moment," said the BT Sport presenter [MUST KEEP IN]. They need to get a good manager in and try and sort it out because it`s a bit of a worry, it`s fairly shambolic at present.

"When you sell a big player, you bring in loads of money and loads of new players and spend a fortune. But some of those new players will adapt very well and others won`t adapt at all and it takes a while to find that out. We saw it with Spurs when they spent Gareth Bale`s money.

"By the time Christmas comes around you still don`t know whose your best team. I think that`s kind of what`s gone on with Everton."