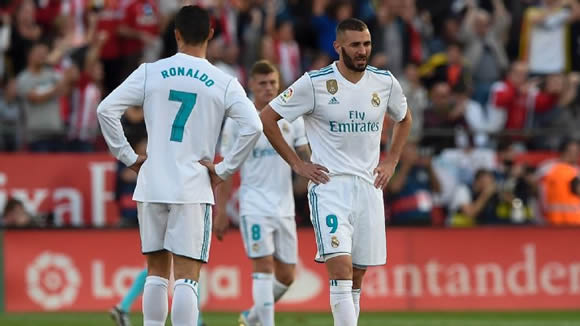 So, at what point do you sound the alarm?

After Real Madrid`s 2-1 setback away to Girona, Zinedine Zidane`s men are stuck on 20 points. You have to go all the way back to 2005-06, his final season as a player, to find the last time they were worse off after 10 games. Barcelona are eight points clear (more on this later) and in outright gloating mode. More of a concern, though, was Madrid`s performance against a newly promoted opponent who had won just once at home this season.

There are no real excuses here. Gareth Bale and Dani Carvajal are out, but Madrid are used to it by now. Portu was probably offside for Girona`s winner, but that doesn`t change the fact that the home team also hit the woodwork twice and created the better chances. (Wheel out the expected goals and it`s 2.44 to 1.58: it marks the first time Madrid have not won the xG in a Liga game since 2016 and the draw in the December Clasico.)

"Many times we drew matches, but we were creating chances... not today," said Casemiro. "It concerns us all that we are very far [from where we want to be]."

What was surprising -- and unlike Madrid -- was that after getting the early goal, they played as if they were 4-0 up in injury time. There was little urgency and little awareness, almost as if all their thoughts were on the midweek trip to Wembley to face Tottenham Hotspur. 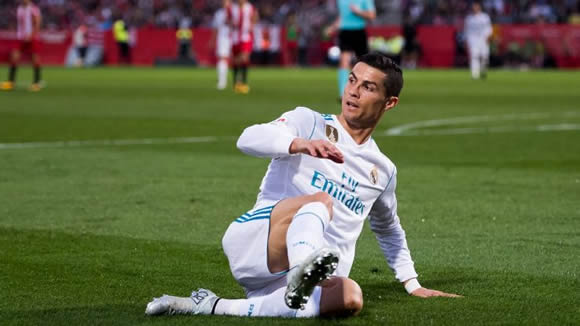 Ronaldo and Real looked lethargic and complacent in the weekend defeat to Girona. But it`s no cause for panic yet.

Cristiano Ronaldo was poor, like many of his teammates, but inevitably he`ll fall under the microscope because he collected that FIFA award on Monday, has scored just one league goal all season long and because, well, he`s Cristiano: he doesn`t hide and has the broad shoulders (and wage packet) to bear the responsibility. However, it should be a collective responsibility. All it means is he didn`t paper over the cracks on Sunday: the underlying listlessness that affected his teammates isn`t down to him.

We know Real Madrid can play better, and we know they probably will. The more interesting question is at what point do they write off the Liga season. No Real Madrid side has ever been eight points back and gone on to win the title. I tweeted that out on Sunday -- thanks, as ever, to the legendary @2010MisterChip -- and plenty fired back that nobody had ever won back-to-back Champions League crowns until Real Madrid did it.

That`s true, but there are better arguments as well. Like the fact that simply put, Real Madrid probably haven`t been eight points back that often in their history. Or the fact that much of that history took place in the two-points-for-a-win era. Or, indeed, that you don`t have to go that far back to find a team that made up an eight-point gap to become champion.

It`s something Zidane will remember well. In early March 2004, Valencia were eight points behind league-leading Real Madrid with just 12 games to play. Rafa Benitez famously went on to lead them to the Liga title, and what`s more, he did it without the benefit of a head-to-head game.

Heck, Real Madrid themselves made up an eight-point margin in 2008-09. They lost the December Clasico to Barcelona to slip 12 back after round 15. By the time the return Clasico at the Bernabeu rolled around, the gap was four points with five matches left. They famously got spanked 6-2 and that was that. But they were pretty darn close to controlling their own destiny, and they had recovered eight points in 18 games against Pep Guardiola`s eventual treble-winners.

Zidane has 27 matches, nearly two-and-half times as many, as Benitez had to turn it around. He also has the two Clasicos left. It`s a tall order, sure, but there is no reason to throw in the towel now. Especially since this Barcelona side aren`t the juggernaut they`ve been in recent years.